A unique perspective on the massive 2017 BC forest fire from a couple of BC loggers.

To maintain the health and diversity of the forest ecosystem, it is all about balancing the good and the bad. Prescribed fires act as a valuable resource management tool for enhancing ecological conditions and eliminating excessive fuel buildup. However, wildfires do occur – ignited by lightning strikes or caused by human activities usually related to carelessness. The province of British Columbia has over 94 million hectares (230 million acres) of forest land with approximately 2,000 wildfires occurring each year. Most are contained within 24 hours. The BC Wildfire Service is internationally recognized as a leader in wildfire management and is known for its skilled personnel and high standards of safety. Previously, the biggest wildfire in BC history was a 220 000 hectare (544,000 acre) blaze that burned in the northeastern part of the province in 1958. Last summer over nineteen wildfires converged in the province’s interior, creating a single blaze estimated to be more than 467 000 hectares (1.15 million acres) in size – making the 2017 fire season the worst in BC history. The massive Plateau fire stretched 130 kilometres (80 miles) from end to end, 60 kilometres (37 miles) west of Quesnel. The entire province was under a state of emergency.

WHAT DOESN’T KILL YOU MAKES YOU STRONGER.

Ben Shortreed and Derek Lamothe grew up together in the logging community of Williams Lake, BC. Owners of West Pro Logging, based near Quesnel, Ben and Derek subcontract the processing and the bunching to two separate companies. Short Trees Ltd. owned by Ben focuses on processing and Firecat Contracting owned by Derek does the bunching. Up until August, 2017 the two combined companies owned four pieces of Tigercat equipment – two 870C feller bunchers, a 630E skidder and an 860C feller buncher. 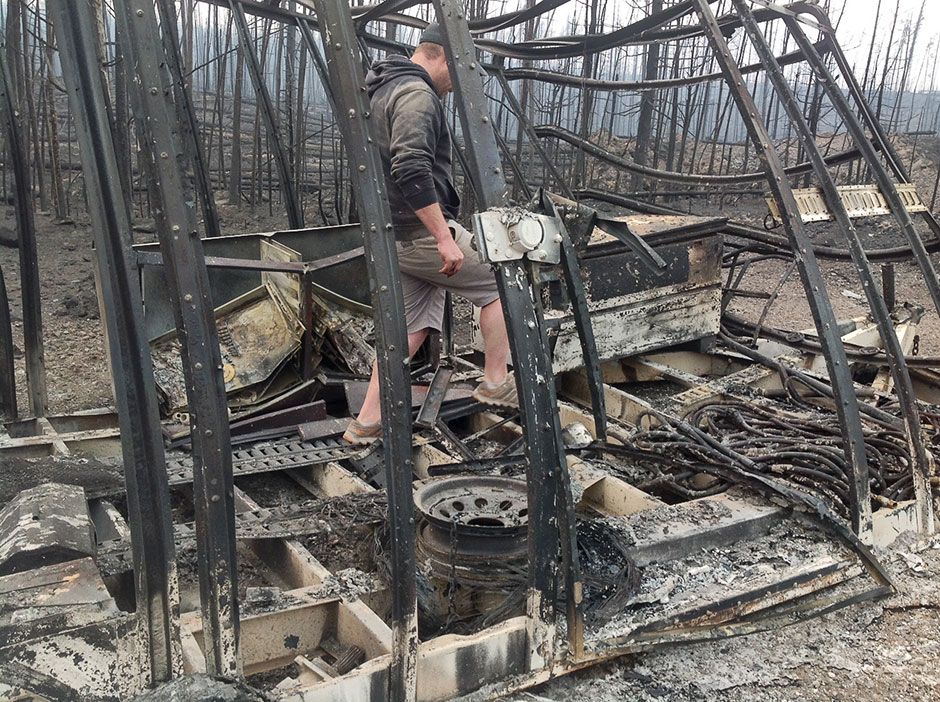 “What it took that night was unreal. You could drive for half an hour through land that wasn’t burned the day before, and then it’s like being on the moon the next day,” Ben explains.

Ben and Derek were logging 100 kilometres (60 miles) west of Quesnel in the Nazko area. “The fires were at least 30 to 50 kilometres away and didn’t seem to be moving. We just kept an eye on them. There were a lot of people aware that we were still staying at our camp. Nobody thought it was dangerous.” However, strong winds were being predicted and all personnel were marshalled out of the area and into Quesnel.

One of the crew members wanted to stay at camp that night, rather than evacuate to Quesnel. Luckily he didn’t, because he wouldn’t have made it out that night. The fires grew and the wind picked up, merging several fires into one mega fire, now named The Plateau fire. “You’d have to see it to appreciate it,” says Ben. “A couple of people have told me that this fire moved shy of 50 kilometres in only six hours. It created its own electrical storm and created its own weather. What it took that night was unreal. You could drive for half an hour through land that wasn’t burned the day before, and then it’s like being on the moon the next day.” Another crewmember, who had been fighting the fires at the time, noticed how far the fire had moved so he went to check on the camp. That is when Ben got a text saying, “The camp is completely gone.”

THE CAMP IS COMPLETELY GONE

Ben didn’t believe it. “There was no way. Our camp was in a gravel pit and our machines were all parked in the middle of a cut block, so we thought there’s no way.” Derek and Ben drove back up to camp the next day to see it for themselves. Twisted and warped framing on the trailers was all that was left. Their three processors and their loader were torched. The camp was completely gone, including four trailers and their entire shop trailer. They were in shock. “It’s amazing when you’ve pissed off Mother Nature what she can do,” laughs Ben.

Ben was stressed to say the least. One rarely hears a good story about an insurance claim. Usually it’s the opposite. Thankfully Ben’s insurance company was able to put him at ease after two weeks of not knowing what was going to happen. “It was just incredible. My broker was amazing and the insurance company that handled all my equipment was phenomenal.” Ben and Derek are very pleased with the H855D performance, stating that the machines are fast and fuel efficient with great hydraulic flow.

Ben ended up with replacements on two machines. “We’d anticipated going north into deeper cut and bigger cliffs, so I decided to go with Tigercat gear instead. I thought I’d get the beast of them all,” says Ben. He purchased two new Tigercat H855D track harvesters from Inland sales specialist Doug Parchomchuk. “Doug is great to work with and Inland has always been good. They’ve been great people to deal with,” says Ben.

Ben and Derek had both run Tigercat bunchers and skidders in the past and loved them. “Tigercat’s got a good reputation, and I’ve heard anybody that buys Tigercat equipment really likes it,” explains Ben. “I just thought, you might as well go with something a little better and something that would be the best for the job.”

Both men are very pleased with the H855D machine performance. “They are very fast and fuel efficient. There is a lot of hydraulic flow and they are a very comfortable machine to work in,” explains Ben. They are working in the Nazko area producing approximately 1 000 to 1 200 cubic metres per day. Everyone is working very hard to have a strong finish before spring break up.

Ben and Derek have plans to continue to grow their business. They know there are always going to be obstacles and want to continue to push through them. “We have a great crew who are talented, committed and hardworking and we plan to take that momentum and keep driving forward,” says Ben. Everyone was affected by the tragedy this past summer and there were a lot of people who experienced hardship. For Ben and Derek, the events of this past summer and the experiences they went through as a company, have made the bonds tighter within their crew. “What doesn’t kill you, makes you stronger,” says Ben.

WE ARE VERY THANKFUL FOR THE CREW THAT WE HAVE. THEY ARE GREAT GUYS AND HARD WORKERS. THEY MEAN A LOT TO US AND THEY MEAN SO MUCH TO OUR SUCCESS. WE HAVE TO THANK THEM AND ALL THE GUYS THAT WORKED TO FIGHT THE FIRES.