The planting of rubber wood trees (Hevea brasiliensis) in the west part of Africa has been going on for decades.

The climate very closely matches the rainfall demands required to sustain this species, originating in the Amazon jungle. Companies like Firestone have been present in this region since early plantings began, reaping the valuable latex for the production of tires and other rubber products. The first Tigercat in Ghana.

Malaysia and Indonesia, where favourable growing conditions also occur, have vast rubber wood plantations. The spread of rubber wood outside of its natural habitat was initially driven by the British in the late 1800s, which is the reason that these plantations are most common in former British colonies with suitable climatic conditions. The western city of Takoradi in Ghana finds itself at the heart of this industry with many plantations under the management of the company, Ghana Rubber Estates Limited (GREL).

Unfortunately, rubber trees — like most other living things — begin to underperform as they approach old age and so at 25 to 30 years, the rubber tree no longer yields the amount of latex required for the economic viability of the plantation. These extended rotation crops need to be cleared and replanted, generating great volumes of wood fibre that until recently have simply and tragically been pushed over and burned with the prevailing opinion that there is no market for such fibre. Conversely, in Malaysia and Indonesia, rubber wood has long been used for high value furniture. Despite its name, rubber trees yield a very hard and durable wood highly regarded in the south Asian furniture industry.

The 635D emerges with difficult from the container.

Enter the Kyoto Accord, the bio-fuel industry and the environmental targets set for European energy producers and suddenly a market for this west African fibre materializes. In Ghana, with the establishment of Takoradi Renewable Energy Limited (TREL) under the auspices of London-based Africa Renewables Ltd and the vision of founder and managing director Jean Francois (JF) Gullion, we now see the regular arrival of vessels to the port of Takoradi to load rubber wood chips. Chips are sold to the European energy utilities for the production of clean and sustainable power.

The use of a Tigercat 635D six-wheel drive skidder to help accomplish the task of harvesting the rubber trees is something that JF had been toying with for some time. His operations manager, Ian Paterson, had worked in similar conditions in Liberia. The application required a skidder that would allow the extraction of the rubber trees in a rateable fashion that was virtually independent of precipitation and resulting soil saturation. The average annual rainfall in these areas can be as much as 5 metres (that’s almost 200 inches) and sometimes it feels like it all comes down in one day! Maintaining the ability to extract even when it rains — but without damaging the sensitive soil — plays into the hands of a six-wheel skidder. And if you dual it up, as TREL does in the wettest areas, then essentially it becomes a twelve-wheel skidder with truly excellent flotation characteristics. The machine was assembled in a day.

Another challenge which arises from a lack of roads, the shape and the layout of the plantations are extreme skidding distances. Cost effective payload is critical for success. The rubber trees, averaging around one and a half tonne per stem, have to be harvested inclusive of their large root stock to prevent subsequent pathogens or disease that would kill future plantings. To achieve this cost effectively the trees are simply pushed over with a dozer or excavator. A team of chainsaw operators follows behind, severing root stock from stem and crown. Finally, the skidder accumulates and skids the trees to the roadside where they are then fed through a CBI chipper into high capacity walking floor trailers, transported to a staging area near the port and stockpiled.

When a vessel arrives to be loaded, all of the harvesting and transport equipment is withdrawn from the field and used to load the vessel as quickly as possible. The skidders, including the 635D, are lowered into the hold of the ship and are responsible for the spreading and compacting of the chips to maximize the ship’s payload.

The rubber trees are chipped at roadside. The CBI unit feeds the chips into high capacity walking floor trailers.

The 635D skidder, extra tires and spare parts were sent to Ghana in two 40 foot containers. Jeff Cave, factory sales and support representative, Africa, and I travelled to Takoradi from South Africa to assist with fi nal assembly, and technical and operator training. (We both of us took our malaria medication this time. I learned a valuable lesson the hard way in Angola which you can read about in BTB #25.)

The assembly process was not without its delays, frustration and amusement. It started with the sad passing of Ghanaian President, John Atta Mills, prior to our arrival. The result was a week of mourning followed by a state funeral set for the very date our skidder was to clear customs. Finally the two containers arrived midway through the following week to the TREL workshop.

The recent discovery of offshore oil and gas near Takoradi has brought on an influx of new mobile heavy lift equipment fuelled by unlimited oil industry budgets. This raised our hopes – our toughest challenges would be to lift the containers off the transport trucks and drag the skidder out of the container onto our working surface. But clearly Jeff and I had champagne ideas backed up only by beer money! 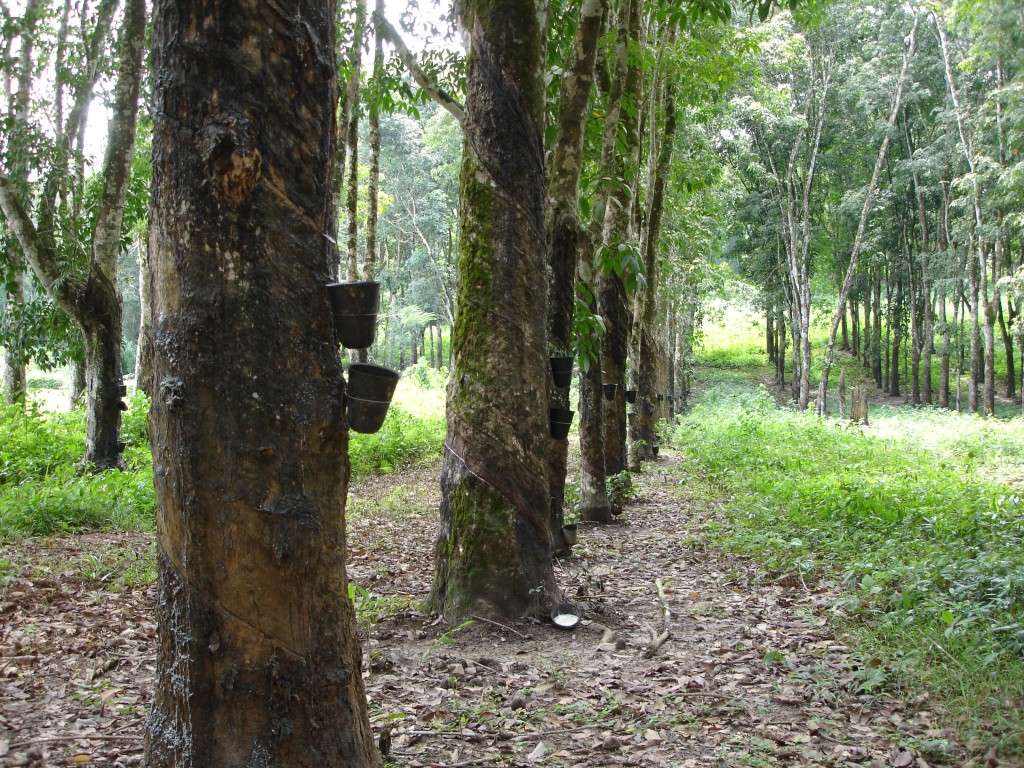 The lifespan of a rubber wood plantation is 25-30 years. Afterward the trees must be removed, root mass and all.

We ended up with a mobile heavy lift crane purchased second hand in Austria 47 years ago. The machine came complete with the proud Austrian owner who regaled us with stories of old: How his crane had lifted 20 tonne logs onto trucks for the export of native hard woods. Together with a later model wheeled loader and an excavator, the task of safely lifting the containers was onerous to say the least.

Finally to the task at hand of getting the machine assembled inclusive of installing the bogies, the front axle wheel ends and the tires. Within a day the machine was ready for inspection by the local Cummins technicians and it was time to pull some rubber trees. Jeff Cave performed some technical and operator training and since then, the machine has worked flawlessly for five months. Jeff made a followup visit to the operation in November to perform additional technical and operator training. Based on the performance of this pioneering 635D, Jeff noted the potential to see further machines sold into the Ivory Coast, Liberia and other west African countries. The rear bogie axle and dual tire arrangement allows the 635D to operate consistently in a region with very high rainfall.