Dalfey’s hot logging operations are all about big timber and soft landings.

Uruguay is a country of gently rolling indigenous grasslands, grazed by 12 million head of cattle. Luis Achugar, director of Rivera, Uruguay based harvesting company Dalfey S.A., observes that his country moves in an opposite direction to many others. While many countries are removing native and plantation forests in favour of pasture and farmland, in Uruguay, pastures are being converted to extremely efficient pine and eucalyptus forests. One of the new 1075B forwarders with approximately 22 tonnes of pruned logs in the bunks.

Dalfey contracts to the family-owned forestry company, COFUSA, also based in Rivera. COFUSA has been engaged in planting and forest management in the sandy soils of the Rivera-Tacuarembo region of northern Uruguay since 1988. The growing season is long and annual rainfall can exceed 2 000 mm (80 in). COFUSA’s forest landholdings total 40 000 ha (nearly 100,000 acres) of mainly the species Eucalyptus grandis. URUFOR is the sister company that processes logs from COFUSA’s plantations at a truly state-of-the-art sawmill, producing high quality lumber and engineered products. Strategically situated, average haul distance to the mill is only 30 km (20 mi). The two companies employ more than 600 people. Luis studied agriculture in Montevideo, and in his final years, decided to specialize in forestry, a seemingly strange decision in the late nineties, when the Uruguayan forest industry was in its infancy and nowhere near the current 13 million cubic metre annual cut. “This was before there was even a pulp mill in Uruguay,” says Luis. But the decision proved prescient. He began working at COFUSA in 2000 and stayed seven years, making the rounds in various departments where he learned about planting, pruning, road engineering and harvesting operations.

In 2007, COFUSA suggested that he become a harvesting contractor. It was a perfect partnership. Luis understood the complexities of silviculture, road infrastructure and harvesting procedures and had already demonstrated the required management skills. For COFUSA, retaining a contractor who was a former company insider was a big advantage – it helped with quality control of the final product mix while ensuring the crucial raw material supply.

COFUSA had mechanized its harvesting operations in 2005. In 2008, during the research phase for new equipment, Luis and Andres Gómez, COFUSA forestry manager, visited the Tigercat factory facilities and became convinced that Tigercat offered an acceptable solution to their unique harvesting system requirements. In 2009, Luis purchased two 1075B forwarders, a custom-built 855C feller buncher and an H855C harvester. Over the past five years, he has added three more 1075B forwarders, another H855C, an H845C, a used 822C buncher and a 220D loader. Contracting to COFUSA, Dalfey harvests the vast majority of wood that flows through the sawmill as well as pulpwood.

Part of the success of COFUSA and URUFOR can be explained by a homogeneous raw material and strict quality control throughout the entire process. Very few companies in the world produce high value lumber from eucalyptus and COFUSA exerts exacting control over the supply chain from seedling to mill yard. For its part, Dalfey ensures URUFOR’s log supply and quality. 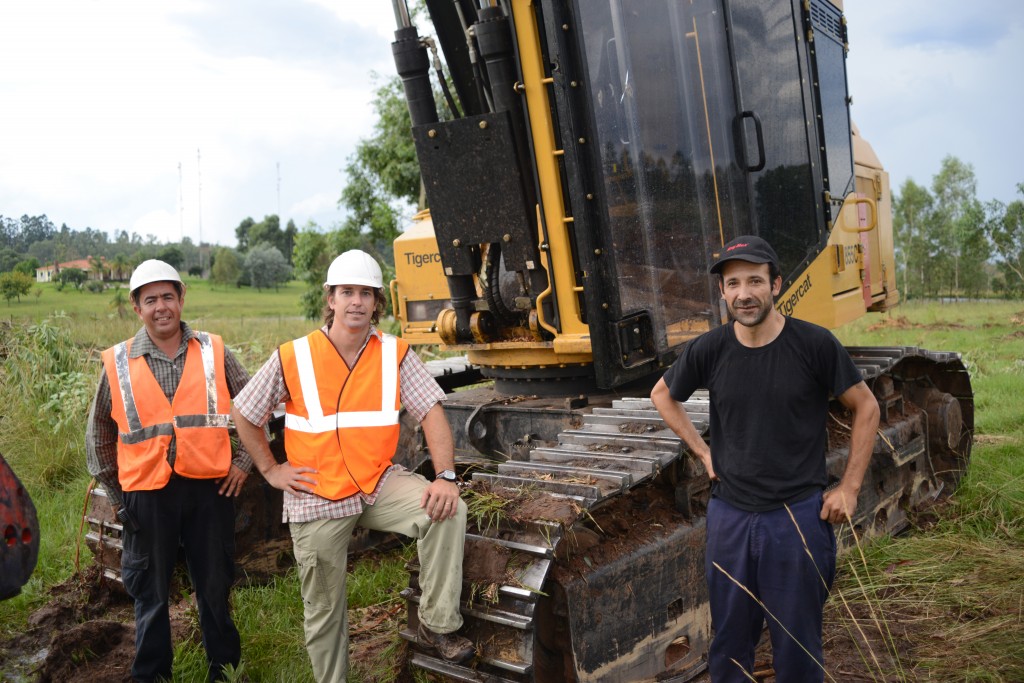 The COFUSA story is an inspiring one. The company began in 1988. The original plan was to grow eucalyptus and export pulp to Scandinavia. In 1992, the family decided to enter the business of manufacturing lumber for export. At the time, this was a radical idea. Other companies were sawing eucalyptus for pallets but no one was trying to make high quality FSC certified lumber meant to compete against tropical hardwoods. Considerable research, development and investment followed on the sawmill side of the business to determine a method to manufacture boards and engineered products that would be able to compete with the best known traditional hardwoods.

The problem with eucalyptus is that it dries out rapidly, causing splitting. So from the moment the feller buncher drops a tree, an imaginary stopwatch starts ticking. The saw logs cut from that tree must arrive at the mill yard within 24 hours of the tree hitting the forest floor. This is the epitome of hot logging and the operation showcases the importance of machine availability and system balance. One of Dalfey’s new 1075B forwarders. The new Tigercat crane is improving productivity, in this case, picking up three logs compared to the Loglift which could only handle two.

There are a few somewhat unique aspects to Dalfey’s harvesting operations. In order to understand it all, one must have an appreciation for COFUSA’s underlying silviculture process, which is intensive. In the first years after planting, a number of herbicide and fertilizer treatments are applied. Prunings occur in the first five years to 10 m (33 ft) in height. The first commercial thinning occurs at seven to nine years and at thirteen to fifteen years, a second thinning yields pulp logs and saw logs.

We visited a 15-year-old second thinning. Since the majority of the wood is destined for the pulp mill, the operation is not hot and the feller buncher had already moved on to another site. (The wood is already too large to be effectively and efficiently felled with a harvester.) A Tigercat H845C tracked harvester carrier equipped with a Log Max 7000 is processing in-stand and one of the original 20,000 hour 1075B forwarders extracts 7 m (23 ft) pulp logs and 5 m (16 ft) saw logs to roadside.

After this thinning, only 150 trees per hectare remain on the stand. The intensive pruning and thinning is supported by reams of studies that take more into account than the total volume yield of the final fell. As Luis explains, it is more important to apply real dollars to the end products sawn out of the larger timber. “Some people ask why we leave so few trees in the stand,” says Luis conceding that the overall volume is reduced. “But the value of the trees in dollar terms based on the products that are sawn from them is optimized.” In this case, less is more.

COFUSA benefits from the fact that Luis understands the logic behind the decisions and the end game. Sure it isn’t optimal for Tigercat 855C sized carriers to fell and process three and four tonne trees all day long but those massive saw logs whizzing through the mill as scanners and saws work their magic is what differentiates COFUSA – URUFOR from every other forest products company on the planet. The final fell occurs at 20 years. By this point the trees are 45 m (150 ft) in height and average piece size is 3 tonnes (3.3 tons). Pruned to 10 m, the trees yield two 5 m clear logs and three unpruned saw logs. The remainder of the trees are merchandised into pulpwood.

To further mitigate costly damage from splitting, the monsters must be controlled and laid down softly during the felling process. This eliminates the possibility of using a directional felling saw which would avoid all the double cutting and be far easier on the carrier. Instead, Luis must use a feller buncher and hot saw to control-fell and lay the trees. The 855C feller buncher works one shift per day. Because the operation is so hot, the buncher cannot be any further than one shift ahead of the rest of the crew. In total, the 855C has worked 6,600 hours in just under five years in this very extreme application. Incredibly, structural issues have been limited to the 30 degree wrist assembly which required a reinforcement plate, and one cracked saw blade; Luis isn’t complaining.

The buncher lays the trees out in a spaced fan pattern so that the limbs – the larger of which can be 12-20 cm (5-8 in) in diameter – are removed manually. Then the H855C tracked harvester equipped with a Log Max 10000 processes the massive trees. While watching harvester operator, Rolando, wrestling with the trees at the edge of the stand, Luis calculates the volume of a tree that Rolando has just processed. The five saw logs weigh in at nearly six tonnes and this does not take into account the two pulp logs. Two harvesters work two shifts per day producing 450-650 tonnes (500-720 tn) per machine per day. Some of the trees at the edge of the stand are quite large. Although this stem is around seven tonnes, Rolando processed it without issue.

Two 1075B forwarders – purchased in late 2013 – also work double shifts to move the wood to roadside for monthly production of 24 000-26 000 tonnes (26,500-28,660 tn). The night shift forwarder operators also load trucks because the Tigercat 220D loader only works a single day shift. In total, the forwarders and harvesters are piling on 5,000 hours per year. The original 1075B machines, purchased in late 2008 and early 2009 and now deployed in the thinning operations, have acquired over 20,000 hours apiece. Luis considers the forwarders integral to his operation and asserts that no other brand could perform this task nearly as efficiently, noting that the load capacity is higher and the fuel efficiency more favourable than any other machine he has run.

When Luis purchased the second set of forwarders, both machines came equipped with Tigercat’s prototype crane. The high capacity F195F85 takes the machines to another level. “I have not done the time studies yet but even with the rotator problems, productivity is higher,” says Luis. (Tigercat is also testing a prototype rotator on the two machines.) Rough observation by Tigercat engineering observing one machine for one shift showed average production of 58 m3 per hour, compared with Luis’s long term average for the original machines of 45 m3 per hour. Fuel consumption on the older machines averages 14 L/hr compared with 16-17 L/hr with the new machines, although Luis says that some of that difference is attributable to the fact the new forwarders do less truck loading – a relatively easy job.

The clear logs weigh 0,75-1 tonne. Luis says that the old forwarder could only lift one log at a time. If the log was further from the machine or especially heavy, the operator would have to drag it toward the machine before lifting it or manoeuvre the machine closer to the logs. The new machines can easily handle a single log and often pick up two logs at once, effectively doubling production per lift cycle. Factor in the larger grapple (one of the machines is also equipped with Tigercat’s prototype FG430 grapple) and the increased productivity in the pulp logs is equally significant. “One machine has done 535 truckloads in 23 days. That is close to 700 tonnes per day in addition to loading 70 trucks,” says Luis. It seems that if there was ever an application custom tailored to the 1075B, this is it. Luis keeps track of all the numbers and can easily calculate production per person, per machine, per shift and per litre of fuel consumed. He also carefully tracks downtime and fuel consumption. Operators are paid bonuses based on the criteria of productivity and machine uptime. All operators are trained from scratch. While new hires may have experience running agricultural equipment, Luis does not hire anyone with previous logging equipment experience and looks more at personality as opposed to experience and qualifications. Luis constantly compliments his operators as we observe the operations. Watching forwarder operator Hugo de Canto silently picking a load of saw logs, Luis comments, “If you don’t hear any iron noises, the operators are working well on the forwarders.” Clear fell crew supervisor, Marcos de Oliveira, worked with Luis at COFUSA. “When I told him I was leaving the company, he said he was coming with me,” says Luis. Dalfey employs 40 people split into three crews for first thinning, second thinning and clear felling. Employee turnover is extremely low and it is obvious from the well maintained machines and spotless cab interiors that the operators value their work and equipment.