250D with AC16 carrier gets high marks in hardwood sawmill.

It’s a bit of a challenge to switch from thinking in tons and cubic metres to board feet, but as Tigercat products find their way into more and more sawmills, the language and measures are becoming more familiar. Thompson Appalachian Hardwoods, Inc., located in Huntland, Tennessee, is one such sawmill that is seeing great value in the Tigercat 250D loader combined with Tigercat’s AC16 articulating carrier. 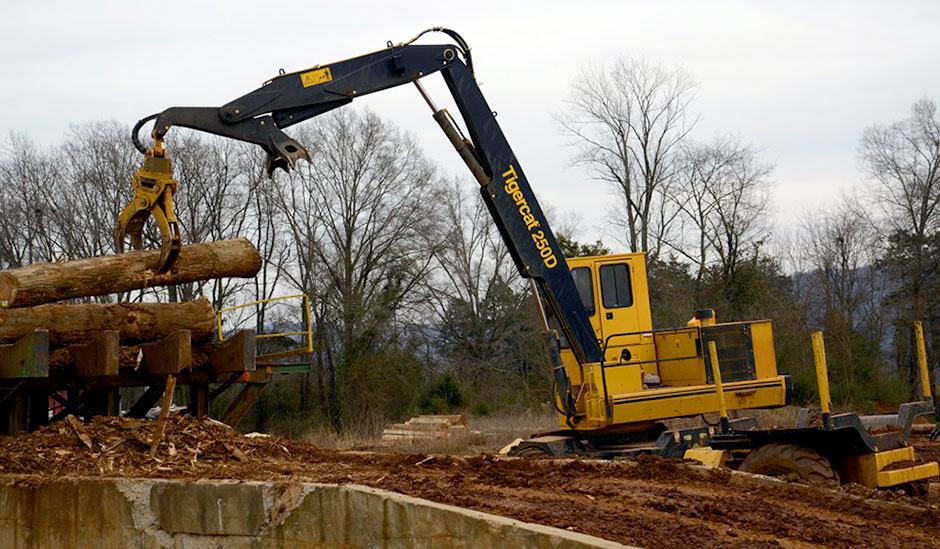 The 250D performs many functions including organizing and stacking logs, cutting tree length timber and feeding the mill as seen here.

President and CEO, Nordeck Thompson, was born into the timber industry. “Our family started logging in the late 1800s in Georgia, skidding logs to the Oconee River with mules and oxen.” Nordeck can entertain with family stories of adventure from another era, telling how each spring his grandfather would ride a log raft more than 100 miles (160 kilometres) down the Altamaha River to the mill town of Darien, Georgia. Navigating a log raft day and night, hopefully with enough provisions to last the duration of the trip, was seemingly a death-defying mission. But as Nordeck puts it, “It was just another seasonal cash crop. After the trip, they would catch a ride on the train back home.”

Nordeck began his career in the hardwood industry with his father, W.N. “Bill” Thompson, Sr. in the late 1970s in Hazlehurst, Georgia. Eventually he and his wife, Mary Claire, relocated their family to middle Tennessee, where they purchased an existing sawmill facility in Huntland and started Thompson Appalachian Hardwoods. From 1993 to 2011, several system upgrades were implemented, transforming the facility into a modern, fully-optimized grade sawmill.  From 2012 to 2015, Thompson Appalachian Hardwoods dramatically expanded its kiln drying capacity from 120,000 to 800,000 board feet. Nordeck and his team – including four of his six children and several other family members – have developed a thriving business built on a foundation of faith in God and a team of quality people doing quality work. Nordeck strongly emphasizes operational efficiency, a safe work environment, high-quality end products and long-lasting relationships that span the globe. This focus allows Thompson Appalachian to do its best for customers and timberland owners alike. “We want to focus on being a top tier supplier with consistent, high-quality products. We also want to provide a great market for our local landowners, giving them optimal value for their timber,” explains Nordeck.

The green sawmill produces 350,000 board feet per week, either transferred to the company’s dry kiln facility or sold as air dried lumber or green lumber products. Thompson Appalachian products are used for doors, windows, millwork and furniture and sold into domestic markets and numerous international markets, including Europe, Australia, the Middle East and many Asian countries.

Unlike the vast majority of Tigercat end-users that market timber to mills based on the ton or cubic metre, Thompson Appalachian deals in Doyle Scale. Nordeck says, “We do not buy logs by weight because of the variety of quality that comprises each load. It is also a challenge for us to buy grade logs tree length because we have to assign specific value to each log we cut. Thompson Appalachian purchases logs on Doyle Scale, a measure of board feet and grade of each log, whereby each log has to stand on its own.”

In addition to the logs that Thompson Appalachian buys from local logging crews, it also has a procurement team that purchases timber tracts. The company contracts with logging crews to harvest and deliver this timber tree length to the mill. As one can imagine, with multiple grades, species, log lengths and tree length loads mixed in as well, there is a lot going on in the log yard. That is where the new 250D loader – AC16 articulating carrier combination – comes in.

As part of the purchase decision process, Nordeck visited a site in Maine to see a Tigercat T234 similarly equipped with the AC16 and the optional bunks and was impressed by the balance of the machine and its ability to get around quickly on tough ground. He noted how versatile it was in the yard and envisioned it in his yard performing many different duties. Nordeck likes the fact that the AC16 carrier has the tractive effort to haul a trailer around the yard in less than ideal ground conditions.

As each load of logs arrives at the Thompson Appalachian log yard, it must be unloaded from the trailer, spread on the ground, scaled, graded, entered into the handheld computer and bar coded. “We let the wheel loaders unload trucks and use the Tigercat to organize the log piles,” explains Nordeck.

The 250D is also used to merchandise the tree length logs from the purchased timber tracts. Nordeck utilizes a slasher system with a longer structure that eliminates splitting damage, with better support of the tree as it lies in the slasher unit. However, Nordeck admits that he doesn’t like to tie up the 250D cutting logs all the time. “I want him stacking logs and handling surges.”

The AC16 carrier is equipped with an optional bunk set, and in addition, Nordeck tows a trailer behind the unit so that large volumes of logs can be moved quickly around the yard. He appreciates the speed and mobility of the machine. With a wide variety of species including red and white oak, poplar, ash, cherry, hickory and walnut of many different grades, Nordeck also appreciates that the 250D allows the yard to go vertical. “We can do so much more in a small area because we can store our log piles much higher. The loader and the carrier is really a great match for us.”

Nordeck continues, “I wouldn’t sell it today for twice what I paid. It’s all about handling logs efficiently.” He credits B & G Equipment with its strong support capabilities as contributing to the success of the machine in his application. “B & G Equipment has it going on.”

Capturing Value in the Adirondacks


Fourth generation logger, Larry Richards talks about his operations in the Adirondacks and leveraging the knowledge and expertise of the team to capture more value – for the company and the landowners.


The Tigercat AC16 articulating carrier with a 250 series loader on a Verso wood yard in Maine.