BTB discovers how two unique Tigercat 1075B scarifiers are efficiently preparing the soil for replanting in Sweden.

Tigercat customers Jan-Olof (Jaj) and son Mikael Johansson of JMB Skogsentreprenad AB (JMB) allowed BTB to visit them in beautiful Sweden to show us how they are using Tigercat 1075B scarifiers to prepare the soil for replanting.

Preparing the soil for replanting is generally referred to as scarification, which is a process of breaking up the untamed surface after the land has been harvested. A heavy-duty carrier equipped with a disc or trenching attachment is used to break through the branches and leftover tops to expose the soil to more light, water and access to nutrients, which encourages strong healthy root formation and boosts productivity.

JMB is based outside of Lima, a small village four hours northwest of Stockholm, in the Malung-Sälen municipality surrounded by small lakes, big boulders, vast forests and the best downhill skiing in the area. There has been four generations of Johansson loggers working in the woods here in Lima, starting in 1925 with Jaj’s grandfather, Johan, hand felling with just a crosscut saw. In 1995, Jaj Johansson took over his father Edwin’s company with his two brothers naming it JMB for Jaj, Mats and Bengt. Several years later the brothers split up the work with Mats running the logging crew, Bengt running the trucks and Jaj managing the scarifying operations with his twenty-six-year-old son Mikael.

Two of a kind

For the scarifying operations, Jaj Johansson owns two Tigercat 1075 series forwarders configured for scarification with Bracke T26 rear arms and two custom fabricated scarifying arms mounted on the rear frame just behind the centre section. One machine is operated by Jaj and one by Mikael. “It works very well with just the two of us working together,” says Jaj.

The original 1075 scarifier was purchased nine years ago in 2007 and now has 15,000 hours on it. The transmission is still running very strong and the entire machine has always worked very well with minimal breakdowns. The second machine is a 2014 Tigercat 1075B scarifier, “You really have to be able to read the terrain as a scarifying operator in Sweden,” Jaj. Operators have to constantly look out the rear of the machine to know when to lift the trenching arms to avoid sparks flying from the metal disc trencher scraping over the rocks.

which is driven by Mikael. Typically scarifiers are equipped with two or three arm attachments mounted to the rear of the machine. To increase productivity, Jaj and Mikael have built two additional arms in the middle of the machine that extend out to each side. This makes for a very unique and productive set of scarifiers.

“You really have to be able to read the terrain as a scarifying operator in Sweden,” says Jaj. JMB faces everything from swamps to steep slopes to gigantic boulders. However, JMB pushes through the long ten to twelve hour shifts in the summer months to take advantage of the long daylight hours, typically covering 3 000 ha per year (7,410 ac). Jaj and Mikael have a trailer they sleep in during the week and try to save Saturday and Sunday for family, friends, motorsports or moose hunting.

Since scarifying cannot take place when the ground is frozen, they typically have to stop operation from mid- December to the beginning of March. Jaj and Mikael use the winter months to carefully inspect and service the machines. In their 160 m2 (1,720 ft2) shop, they go above and beyond a typical seasonal service to ensure maximum uptime and machine availability for the next demanding summer season. “That is the key to success,” says Tigercat AB sales specialist Sven-Ake Stenberg. JMB also plans ahead and will store critical spare parts in their garage just in case something breaks down during the summer season. 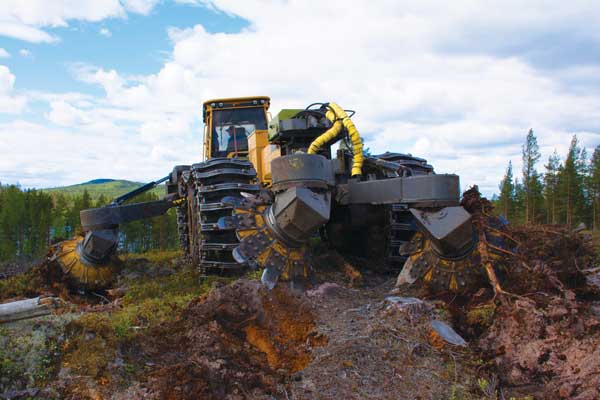 Forest covers roughly 70% of Sweden, extending over 28 million ha (70 million ac). Of this area almost 23 million ha (57 million ac) are productive forestland. The entire harvesting rotation in Sweden can be an 80-100 year cycle. First, the existing wood is harvested. Then, according to Swedish regulations, the land must sit for two years before scarifying. Next the tree planting high ballers will come in and manually plant the seedlings. This is then followed by first and second thinning prior to a final fell harvest. The scarifying portion of this cycle is vital to boost growth right from the start.

The Programme for the Endorsement of Forest Certification (PEFC) is the world’s leading forest certification organization. As an international nonprofit, non-governmental organization dedicated to promoting sustainable forest management, the PEFC continues to add more regulations affecting small forest owners and ultimately, the contractors in Sweden and other parts of Europe. “New environmental rules such as oil leaks are now making it cost a lot to just drive,” states Jaj. Therefore JMB requires durable equipment that will last that much longer as these costs affect the bottom line more and more each year.

As for most forestry business owners, the main goal for Jaj and Mikael is to pay off their equipment and use that equipment for a couple more years after the financing term is over. “I think it is only Tigercat that can deliver this for us,” says Jaj. “You hear from other loggers in the area that experience many more breakdowns than us and they aren’t even scarifying.” Both the machine and the driver take very hard hits working in these conditions, so durability was a top priority in the purchase decision.

The visibility is very nice out the front and the back which is very important for us to steer clear of boulders.

Both Mikael and his father are very tall with Mikael being 200 cm (6 ft 5 in) tall and Jaj at 193 cm tall (6 ft 2 in), so they especially like the spacious Tigercat cab. “I don’t understand why other manufacturers have such small cabs when the machine is so big,” says Mikael. “We can run up to twelve hour shifts so it is very nice when you have enough room for your cooler of food for the day.”

“The visibility is very nice out the front and the back which is very important for us to steer clear of boulders,” adds Jaj.

The standard tires were removed from the 1075B in place of larger 23.5×25 tires for longer life and higher ground clearance in this rocky terrain. The larger wheels add about 8 cm (3 in) more ground clearance. The larger bogie also helps with flotation and low ground pressure. “The underbody has taken a lot of hits with boulders but it holds up great,” says Mikael.

The Johansson men truly enjoy the feeling of freedom being in the woods every day and have been doing so for 90 years with Edwin Johansson, Jaj’s father, scarifying professionally until he was 75-years-old. The Johansson’s will soon reach their 100 year anniversary in the woods, which is cause for celebration! Tigercat AB sales specialist, Sven-Ake has known Jaj for 30 years now and JMB can always rely on his support in the woods. Jaj is currently on season 42 and is shooting for 50 seasons before retirement. BTB is honoured to see JMB relying on Tigercat’s scarifiers to continue the legacy to 50 successful scarifying seasons!


Tigercat finds niche in one of Sweden’s most demanding forest machinery applications. 
Proper scarification is very important to accelerate the tree planting process. The fastest growing reforestation company in Canada, HRI, has turned to Tigercat’s, six-wheel 635E scarifier to get the job done.