Fire in the Woods

The news of the massive wildfire near Fort McMurray, Alberta is a timely reminder that loggers need to be vigilant to the risks of wildfires, while understanding the important natural process of wildfires for woodland environments. While fire may be necessary, proper logging practices and forestry management can help to reduce the risk of large scale, out of control forest fires. In the boreal forests of Canada, for instance, fire is vital to the growth of jack pine and lodgepole pine. Their cones have a waxy coating that requires the heat of fire to release seeds. Eucalyptus forests are even more tightly tied to fire for regeneration and propagation. In some eucalyptus species, the seed release is triggered by fire and the seeds grow in the ash. While in others, epicormic buds on the branches and trunks will sprout when triggered by the stress of a fire. Without regular fi res, these forests cannot regenerate properly. Humans often seek to prevent or completely eliminate forest fires.

Human habitation has grown even closer to forests and people naturally seek to protect their homes. However, completely interdicting fires not only slows down reproduction and reduces productivity of forests, it also stores up danger for larger and larger fires. Deadwood, biomass and slash accumulate as fuel on the forest floor. Older, diseased trees are more vulnerable to fire. Eucalyptus and pine forests will even produce flammable saps and oil as they age that further heighten fire danger. All of which leads to bigger fires when they do inevitably happen. An LS855C harvester working in a timber tract that previously suffered a forest fire.

Mechanized forestry harvesting can help to maintain balance in the forest. By scarifying, removing biomass, mulching weeds and thinning, the fuel load is reduced and light levels for new trees are increased. Both cut-to-length and full tree thinning operations can significantly reduce the severity of fire damage. Clear cut firebreak zones can be used to protect homes and facilities. With lower fuel loads and more firebreaks, controlled burns can be used to safely restore forest ecology with less risk of creating nearly impossible-to-stop conflagrations. 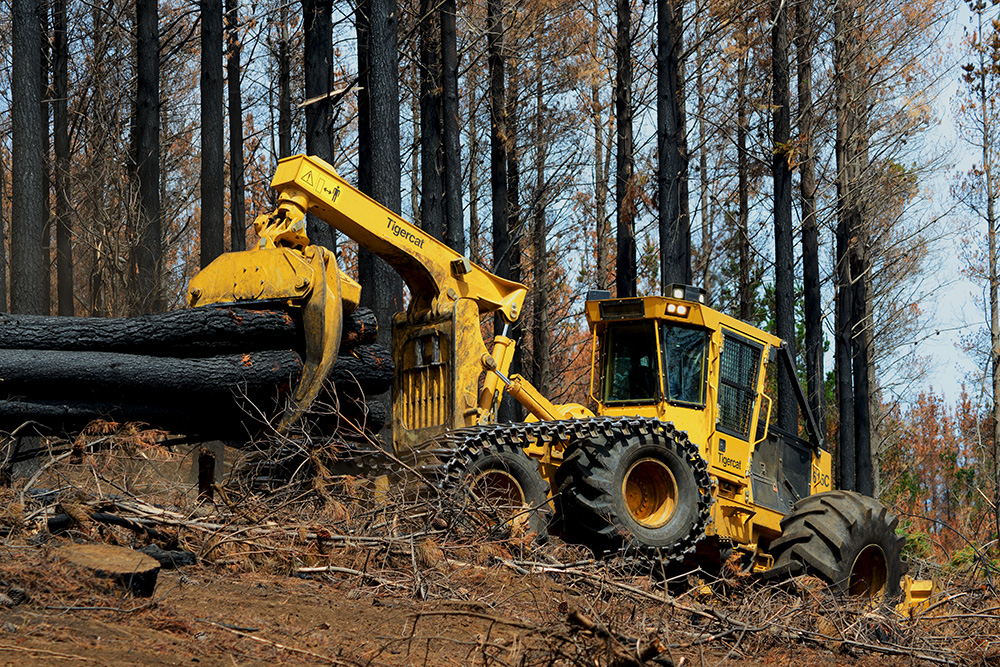 Such thinning can produce wood chips and other commercial biomass, but is generally not very profitable, so in some parts of the world such as Australia, governments are paying contractors to perform thinning and forest cleanup to ensure future forest health and reduce fire risk.² In northern British Columbia, local entrepreneurs are looking to biomass to both manage fire risk and provide home heating for rural communities.³

After fires, deadwood can be profitably salvaged to prevent future fuel buildup. The practice of mulching which essentially breaks down standing biomass into fine material while facilitating decomposition and retaining soil moisture also eliminates a critical element for a fire to flourish – oxygen. Fires passing through mulched forest biomass typically slow, smolder and suffocate.

US government figures show that almost 90% of wildfires are caused by human activity such as campfires, cigarettes or even arson. The remainder are caused by natural factors such as lightning.4 Loggers have an important role to play in fire safety. Dealing promptly with combustible fluid leaks is critical to reducing fire risk. Keeping your equipment clean and avoiding buildup of wood debris around the engine exhaust system and hydraulic pumps help prevent ignition. Ensure your machine’s fire suppression system is in proper working order and hand extinguishers are charged and available. Besides the cost of your machine, think of the safety of your workers and your whole community. 
Compared to other mobile industrial machines, equipment used in forestry has an above average risk of being damaged or destroyed by fire. Take the right steps to minimize the risk of fire. Learn more about best practices.