Samantha Paul begins a new series on women in logging with hopes to inspire young women to consider logging as a career. First up, an interview with BC based operator, Hannah Dehoog that explores how she got into the logging industry, what life is like for a woman in logging camps and what she loves about being an operator. Hannah Dehoog – AKA Logger Girl and Hanimal – of Smithers, British Columbia, is catching a lot of attention in the logging community. It’s not just her engaging presence on social media, but her determination, bravery and skill as a young female heavy equipment operator working in a decidedly male dominated industry.

Hannah has been exposed to and involved in various aspects of the forestry industry for the majority of her life. Before she was even old enough for school, Hannah was marching around the bush alongside her father, a log buyer at the time. In high school she worked at a tree nursery and a sawmill, and now at the age of 22, Hannah works as an equipment operator for Groot Bros. Contracting Ltd. out of Houston, British Columbia.

The ﬁrst question Hannah usually gets asked when someone discovers what she does for a living is, “How did you get into that?” Although her father, Chris Dehoog is a log buyer for West Fraser, she was introduced to operating equipment by an ex-boyfriend. While visiting him at a remote logging camp, a crew member suggested that she get a job on the crew. “No one thought I would take the suggestion seriously but as soon as the idea of running equipment came into my mind, it lit a ﬁre in me. This is what I want to do,” she says.

Hannah wasted no time. Before making the long drive home, she found the name and address of the contractor and stopped at his house to beg him for a job. She had no operating experience but was extremely determined. She recalls that after some persuasion the contractor said to her, “I will give you a chance, just don’t piss me off.” She was ecstatic. She couldn’t wait to tell her Dad. “Guess who’s going logging Dad?” Hannah yelled. He was thrilled.

Hannah’s father, Chris, is well known in the logging community and is a huge motivator for Hannah. She works hard every day, not only to prove herself as a female operator but to make her Dad proud. “That drive will never change,” Hannah states. “Most people think the start of my career as an equipment operator got handed to me by my Dad, but it didn’t. I did it all on my own,” she explains. “My Dad will be the ﬁrst to tell you that he did not lift a ﬁnger. He did not make a phone call or be a reference.” 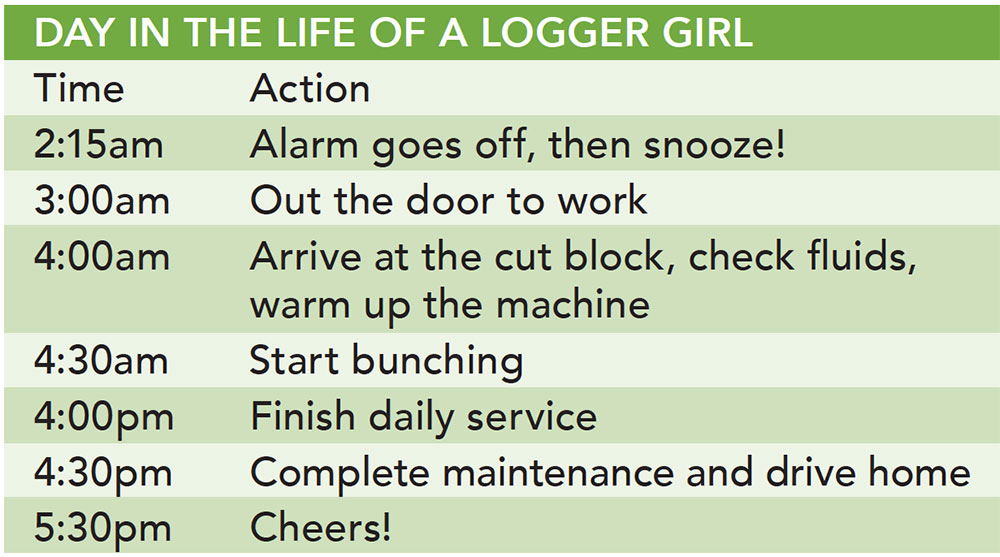 Day in the Life of a Logger Girl

How many young women could survive life in the middle of the bush, with no cell service, infrequent showers and only the company of an all-male crew for weeks on end? Hannah happily took on this challenge. “It was intimidating being the only girl in the camps. It is deﬁnitely more challenging for girls,” says Hannah. “It took a while to get used to only showering every ten days,” she said. When BTB spoke with Hannah she had just ﬁnished eight months of night shift, working alone with just a satellite SOS phone and the stars. “I got used to it. Some nights I got freaked out but I did what I had to do. It was an adventure.” My heart is like a compass that points to anything that feeds adrenaline.

Hannah started out on an excavator, learning simple hydraulic controls and basic machine maintenance. On day three she got behind the seat of a processor operator and by day four she was on her own operating the processor. She recalls her boss telling her not to ﬁ re a log through the cab. After two years operating a variety of machines including excavators, processors, skidders and loaders, Hannah ﬁnally got her hands on a Tigercat feller buncher, an LX870C. Hannah had always wanted to run a leveling machine. “I’ve tackled some pretty steep ground with that tilter and loved every minute of it,” she states. Tigercat quickly became her favourite brand.

Having run an 880 logger, several Tigercat skidders and both an LX870C and 870C, it was clear to her that Tigercat manufactured for the operator. “Life changing,” is how she describes the Turnaround® skidder seat. “And I love how accessible everything is with the buncher. The hood ﬂips open, the auto hydraulic pump is great and all the doors and guards are easy to use.”

When mechanic, Dave Hunter and Hannah were both working at Matt Hromatka Contracting, he gave her the nickname Hanimal and it has stuck with her over the past three years. When asked what type of Hanimal she is, she always responds with, “I’m a Tigercat.” She considers herself a bit of an animal – a little wild and outgoing in almost every aspect of life.

Hannah is an adrenaline junkie. “My heart is like a compass that points to anything that feeds adrenaline,” she states. “When I am not logging, I am sledding with my family, dirt biking or hanging out with my boyfriend and pit bull, Phoenix.” Making more than the average twenty-two-year-old, Hannah spends a lot of her pay cheque on toys that keep her playing outside all year round. She loves taking on new challenges. “There is nothing a guy can do that I can’t do. That is what fuels me,” explains Hannah. “If someone doesn’t think I can do it, I want to prove them wrong.” The power of social media

“I am very proud of what I do as a female forestry equipment operator and so I want to share it with the world,” explains Hannah. “I also don’t think there is enough promotion for women in logging.” Since she started sharing her logger girl lifestyle on social media, other women have been curious about what it is like to be a woman working in harvesting. Hannah provides them with candid insight whenever asked.

Due to Hannah’s social media presence, she often gets recognized around Smithers and Prince George, British Columbia. She loves the attention but understands other young women are watching her so she tries to behave online. “I have a cheeky way about explaining some of the challenges I face but I absolutely love my job and truly encourage other women to give it a try.”

The next step in her career is to get certiﬁed to low bed equipment as she feels that would be a useful skill. She could also see herself working steep terrain abroad and has had job offers in New Zealand. It takes a certain type of person to log every day whether you’re a girl or a guy. “I don’t think women are superior to men and I don’t think men are superior to women. We are equal and we all need the same opportunity,” she says. Hannah is driven, hard working and tough. She is proud of what she does and isn’t going to stop promoting her logger girl lifestyle anytime soon. Hannah feels very lucky to now work the day shift only a forty-five minute drive from her family home.

Cutting on the Edge in Eastern BC


The Larson family has been working in the forests of British Columbia since at least 1929, when Ivar and Lance’s grandfather started his first logging business. 
With Turnaround, the operator drives blade-forward or grapple-forward with full control of all functions. The full speed range and maximum tractive effort are available in both directions. Used to its full potential, Turnaround expands the capabilities of the skidder. Imagine what Turnaround can do for you.