BTB visited Olympia, Washington to get operator Gary Smith’s impressions of his new
LX870D track feller buncher. Gary works with R.L. Smith Logging, which is owned by his
brother and sister-in-law Roger and Carmen Smith.

BTB: When did you start operating the LX870D?

Gary: The machine started working at the beginning of February. It currently has 1,100 hours on it.

BTB: What did you operate prior to this machine? BTB: How long have you been operating equipment for?

BTB: What are your thoughts on the new model?

Gary: Well, I like just about everything right now. The boom movements are quick and the saw head is quick. There has been a lot of thought put into this machine. I’ve been smiling since day one. First day I ran it I thought this is impressive. You can tell that the guys that build these understand loggers. They even put the storage area in the back, which is great for the shackles for the tether. The toolbox is also really nice, I can put a spill kit in there and shut the door and nothing gets thrown around too much. The LX870D tethered on steep terrain near Olympia in Washington state.

BTB: Why did you guys decide to purchase the Tigercat LX870D?

Gary: The difference in the maintenance cost is just phenomenal. I mean tens of thousands of dollars cheaper a year to operate. I told Roger buy whatever you want but that 870 was so good it wasn’t really a question. It had over 21,000 hours on it and it has the original swing bearing. The other brand at 10,000 hours already had two swing bearing replacements on it. It severely cracked from one end to the other. And other brands overheat. The Tigercat runs cool. 143 degrees Fahrenheit is as hot as I have ever seen the oil get to on the computer and that is very cool for a buncher.

BTB: Have you noticed any new features with the new cab?

Gary: I was very leery about the rearview camera but I got used to it very fast and I really like it. I use it constantly. At first, I didn’t think I would like it but for tethering it is perfect. It makes it easy to look at my tethering lines without having to swing around when I am going down the hill. We also do a lot of selective cutting around RMZs [resource management zones]. Normally you would have had to turn around to come out but now you can just use your camera to back out. That is a really nice deal there. 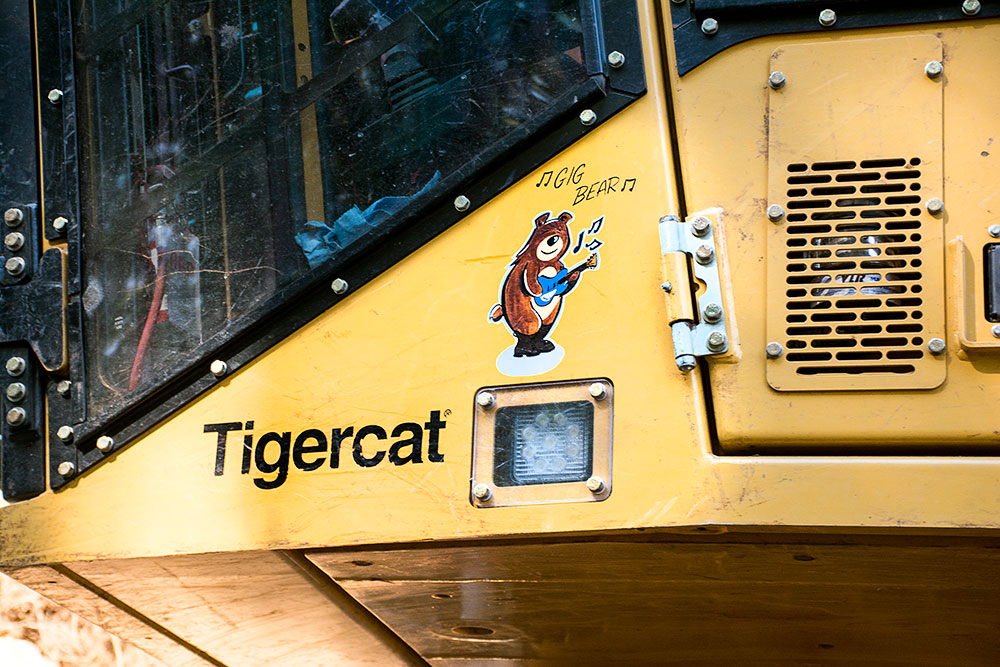 Gary likes to play guitar so his brother added “Gig Bear” to his cab door.

BTB: What are your thoughts on the longer R-163L undercarriage?

Gary: This machine gets around a lot lighter than it is. It performs like something that weighs 10,000 pounds less. We were worried about the soft terrain but the ground pressure is even better than the older 870.

BTB: Your previous machine didn’t have ER, are you using it now?

Gary: Yes, you use a lot less effort and the boom shoots right out. It’s so quick.

Gary: I told my kids I had Bluetooth now and they laughed. I don’t know how that works, but my kids said they would get me an iPod and get me hooked up.

BTB: What improvements would you suggest for the engineers back at the factory?

Gary: I honestly can’t think of any. It has got everything that needed to be changed on the old one. I can’t come up with anything. It has great access and steps everywhere you need them. I like how you can fuel without lifting the lid. Having interior lights come on when you open the door is very nice in the morning.

I’ve been smiling since day one.

BTB: Have you been using Telematics?

Gary: I like to know how much fuel and DEF I am using every day. My sister-in-law Carmen is in the office and likes to look at the average history of fuel and DEF usage. She showed me how to log in and look at the graphs to see when I am idling and when I am working. It was really neat to see. It turns out I go in two hour spurts. I work for two hours then take a 10-minute break and relax. Then I go for two hours again. I never paid attention to my pattern but [my brother] Roger was laughing at that.

BTB: What is it like working with your brother rather than managing your own company like you once did?

Gary: I like it. I get to do the part I like now. All I do is take care of this baby right here [points to his LX870D]. And Roger finds the work. When I was on my own I was only one guy. I had to stop work to go bid on a job that I might not get, and it bothered me. I decided with my kids that I want to have time to go to baseball games. This is more my style. I didn’t like being a business owner.

BTB: Have you visited the Tigercat factory?

Gary: I had the chance to go but then something came up and our mechanic went. He couldn’t stop talking about it for months after he got back. He said they were so informative. The only thing they wouldn’t tell him when he asked was what type of steel they were using – they laughed. Roger says I have to go sometime and I do want to. I have seen Ken [MacDonald] at a couple of logging shows and I’ve been to a Tigercat dinner and that man is impressive. Those are the type of people you want to buy equipment from. You know it isn’t a company that is just slapping things together and pushing them out the door and saying sold! With this machine and the last machine, there has always been someone asking how things are going and checking up on you after you purchase it. You know there is someone back in Canada at the factory that cares about you.


BTB went to Chibougamau in central Quebec in April to visit with Jocelyn Gagné of Forestier 2P Logging and get his first impressions of his new 1085C forwarder.