An update on the processes, technologies and advancements at work in Chile’s challenging steep slope and cable assist logging operations.

Cordillera de la Costa or the Chilean Coastal Range is a mountain range that runs from north to south along the Pacific coast of South America. It runs parallel to the Andes Mountains, extending from Morro de Arica in the north to Taitao Peninsula, where it ends at the Chile Triple Junction, in the south. Between these two ranges is what is known as the flat central valley where there is some relief from what is otherwise considered rugged, steep terrain. Add to this an annual average rainfall of 1 200 mm in Concepcion in the north to 2 000 mm in Valdivia in the south. And just when you thought the going was tough for logging operations, factor in the prevalence of high forest undergrowth, including climbing vines. And no, we are not done yet — Chile’s forest industry finds itself almost devoid of valley bottom roads, meaning extraction is almost always uphill to crest or spur roads.

Traditionally — like most other countries with these challenges — Chilean logging operations, whether they are ground-based or cable logging systems, have been largely motor-manual with extraction being either cable skidders or small European-style cable yarders. However, modern logging equipment has quickly evolved with the introduction of Tigercat six-wheel skidders and leveling track shovel loggers. Now the opportunity exists for ground-based harvesting systems to be used in steeper terrain that was previously the domain of the traditional cable yarding systems. There is strong collective opinion expressed by the Chilean forestry companies that a man in a certified cab working on steep terrain is far more safe than a chainsaw operator or choker setter in the same environment.

Mecharv’s cable assisted LS855D felling and bunching for a yarder.

Tigercat and its dealer Latin Equipment Chile (LEC) rose to the challenge with the LS855D shovel logger (configured either as a feller director with the 5195 directional felling head or with a live heel shovel logger boom) and the Tigercat 635 series six-wheel skidder. Combining these machines with the tethering technology and expertise from New Zealand provides the safest possible harvesting solution – even further reducing the reliance on hand falling, cable skidding and aerial extraction – methods which require manpower on the ground in exposed and precarious situations.

The Tigercat LS855 series shovel loggers cost effectively convey wood 50-100 metres uphill and position pre-bunches in a more advantageous location for the six-wheel drive skidder to perform the secondary extraction on the easier terrain. Tigercat shovel loggers equipped with feller-director boom systems and the 5195 directional felling saw are greatly expanding the terrain that can be mechanically felled. Many Tigercat shovel loggers and skidders are leaving the factory bound for Chile and other steep slope regions with factory installed tether points, ready to accept cable assist systems. Accompanying software is ready to integrate with third party winch assist equipment.

Forestal Nylyumar owner, Pablo Martorell, sat down to talk about the evolution of his company’s operations in 25 years. The operations range from flat ground to steep slopes and the overarching goal of the company is to be able to cover the entire range of terrain and to replace men on the ground with mechanization. Pablo explains that it has been a very long process from fully manual operations with animal powered extraction, to the beginnings of mechanization with track skidders and modified excavators, to where the company is today.

Pablo says that the company’s mill clients and the market in general have become more demanding, with steadily increasing safety standards that impact work practices and machine specifications. “It is no longer an option to purchase equipment that is not purpose-built for forestry applications,” states Pablo. Dealer support and mechanical availability are much more critical as the mills push for longer shifts and around-the-clock operation. Many of Pablo’s machines are double shifted and clocking 300 hours per month. He is demanding 85% availability with planned maintenance and employee breaks factored in. This leaves very little time available for breakdowns and unplanned maintenance. “We have the Tigercat 615 working ten days on and five days off. The mill wants to change to 30 days per month with three shifts per day. The machines will never stop. We will need back-up machines even to do preventative maintenance. You can see how important it is becoming to have tough and reliable machines.” He also notes that adding a third operator and rotating through operators on a daily basis will likely increase wear and tear on the machines and increases the chance of misuse. Pablo figures that he can run the machines to 18 000 hours on a high duty cycle and then revert them to a spare machine status.

The sites that the 615C skidders operate on are pine jobs up to 35% slope. There are two identical systems: Two older cable skidders support a 615C. An LS855C shovel logger configured as a feller director handles all felling and normally performs one shovel logging cycle as well. Pablo explains that the cable skidders will work in bad soil areas in wet weather, bringing stems to the 615C which handles the balance of the skidding.

Cable assisted operations in Chile are typically found on sites with some significant percentage of terrain at 100% slope but also ranging down to 60% — grades where many readers will have seen mechanized machinery, especially tracked felling machines, working happily and without cables in Canada, the US, New Zealand and Scotland. The difference in Chile comes down to soil quality and rainfall in combination with the slopes.

Tigercat started in the cable assist arena by equipping the LS855 carriers with a bolt-on cable mounting system. The effort focused on mechanizing felling on steep slopes and possibly replacing yarding with shovel logging. Often the machines were felling for a yarder and the next step in the evolution was to try to further reduce reliance on yarding rigs by adding winch assist systems to skidders.

In conjunction with inventor and Pacific northwest logging contractor, Eric Krume, Tigercat now has a patent pending cable routing and mounting system for skidders. It is offered as a factory-ready cable assist package. The clever concept routes the cables through the blade and attaches to the frame structure behind the front axle, closer to the payload. With other systems that route the cable underneath the blade, there is always the danger of damaging the cable with the blade. Not only is this possibility eliminated, but the operator can raise the cable if required, say to clear an obstacle, merely by raising the blade. Approximately 8 tonne drags for the 635E.

In the case of long-time Tigercat and LEC customer Mecharv, a 635E skidder is tethered to an Ecoforst T-Winch with an eight tonne maximum pulling force. We observed the machine carrying approximately eight tonne loads on a grade ranging from 40-45%. Nothing earth shattering, but good, consistent production with little to no ground disturbance due to wheel spin. The feller director configured LS855D was on a similar grade with a higher capacity winch system.

At the other end of the spectrum, in KBM’s southern Chile eucalyptus chipping operation, headed by Ismael Hermosilla, the crew was often experiencing isolated sections of moderately steep terrain. While not considered to be steep slope logging, the poor soil, especially during high rainfall in winter combined with the 30-35% slopes in isolated parts of the cut blocks were significantly reducing the effectiveness and productivity of the skidders. KBM uses an LS855D shovel logger to get the wood out of steep sections to where the skidders can more easily perform secondary extraction duties to roadside.

Ismael attended Demo International in British Columbia last September. After seeing the 632E for the first time, KBM purchased two units as well as a 635E. Ismael also spent some time with Tigercat people discussing the possibility of adding an LS855D shovel logger to the southern operation. In the end it was decided by Ismael to purchase a Tigercat LS855D configured with a shovel logger boom and live heel and grapple to extract, shovel and pre-bunch the trees from the steepest sections of the cut block to easily accessible points for the skidders to finish the job.

The shovel logger accomplishes these 50-75 m (165-245 ft) turns effortlessly – with very low fuel burn and minimal soil disturbance. Most users, including Ismael, report that the shovel loggers are always busy and piling on hours, because of their flexibility and swiss army knife-like capabilities on a logging operation – both in the stand and at roadside.

In August, Latin Equipment Chile hosted a customer appreciation weekend. And where better to hold an event for a bunch of steep slope loggers, than on the slopes. The customers, along with representatives from Latin and Tigercat spent a weekend skiing and enjoying the mountains at Corralco.


A visit with Eric Krume provides a glimpse into future possibilities for Pacific Northwest logging. 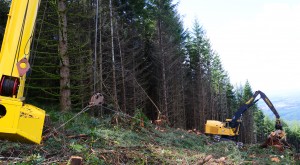 
In just a couple of years, with AB Equipment at the helm, the Tigercat machine population in New Zealand has exploded from a handful of units to over 120. 
Douglas Logging on the North Island puts the Tigercat 635D skidder through its paces, pulling heavy Radiata on steep ground.