From conducting safety audits to running forwarders to sourcing parts, Theresa is hands-on when it comes to the family business.

WOMEN NEED TO BE MORE INVOLVED.
There is no need to hide in the office. Growing up on a farm with three older brothers, Theresa was very familiar with hands-on hard work. However, she never imagined she would be owning a logging business with her family. “My husband Peter has been in logging for thirty years but it’s something I never would have thought of getting involved with,” she says. Now, Theresa is involved in all aspects of the business, checking up on the crew, operating the forwarder, conducting safety audits, sourcing parts, and catching up on office paperwork. “I love being out here in the bush. If I didn’t have to do everything else, including housework and office paperwork, I’d be happy to stay in the forwarder all day,” says Theresa.

I LOVE BEING OUT HERE IN THE BUSH.
I’D BE HAPPY TO STAY IN THE FORWARDER ALL DAY.

Theresa and Peter have been married 25 years. They have three kids – Callum, 23, Benjamin, 19 and Zoe, 17. Callum operates a Tigercat LH822D harvester and Benjamin operates an older model LH830C harvester. “It’s always got challenges [working with family], but we’re a close family and it keeps you close,” Theresa explains. “But you never get away from it. Our vacation is going over for factory tours. It’s hard to sever the two. But we love it,” she laughs. When the family isn’t working in the bush, they go four-wheeling in the NSW high country, up through the mountains. They also love clay target shooting – Theresa and Zoe won the Junior and Ladies High Gun Championship for the Cooma/Tumut Gun Clubs in 2018. “Everyone laughs because we work all week together and then we’ll go shooting, camping or off-roading together on the weekends,” she smiles. Theresa operating their 1075C forwarder, “I hop in to operate the forwarder whenever needed,” says Theresa.

A lot of logging contractors in the area are comprised of a husband and wife team. However, Theresa is notably hands-on and operates equipment whenever the need arises. “It’s not a shock around here that I own a logging company and can operate forestry equipment but when we go away to forestry related events, the women are surprised at how involved I am in the daily operations,” Theresa explains. Theresa only knows of one other female operator in the area. “I think forestry and logging has always been perceived as a dangerous industry and that is what scares people away from it.” P & T harvests primarily for Hyne Timber, a sawmill in Tumbarumba. Both crews clear fall in mature pine forests with a small component of second thinning. Production averages approximately 700 tonnes per day between the two crews. “Average tree size varies between 0,8 cubic metres up to 1,5 for the mature sites,” states Theresa. Peter and Theresa were pretty confident in the decision to start their own business when the opportunity came up. Peter knew the operational side of the forestry world being in the industry for over thirty years. “I had been around it for a while so I had an idea, but there is a lot of extra work that goes into owning and running your own business,” says Peter.

When we go away to forestry related events,
THE WOMEN ARE SURPRISED AT HOW INVOLVED
I AM IN THE DAILY OPERATIONS.

Theresa worked in the banking industry for fifteen years and did casual work at vineyards and service stations when their kids were little. “It was a nice change getting out of banking and doing odd jobs. But then to start our own logging business, it was a huge learning curve for me.”

Theresa and her husband have visited the Tigercat factories in Canada in 2009, 2016 and 2018. “It blew my mind how big the company had gotten when we were back in 2016. And a lot more mechanized with robots, it was just amazing. It was like a happy success story coming back after the downturn in 2009,” she expresses. “It is amazing going back to the factory and going to different shows, you see the same staff, the same people. And I don’t know how Ken [MacDonald] remembers everyone but he does. He always walks right up to us and says, ʻHello Theresa, Hello Peter.’ And it blows my mind.” “We have run our machinery to high hours and we have never had a big problem,” says Theresa. The company had to replace an engine on its first H845 harvester. “We were happy to do that. The machine already had 30,000 hours on it.”

The company’s first fourteen tonne 1014 Tigercat forwarder was reliable but not the right capacity for the operation, so they decided to purchase the twenty-tonne 1075B after AusTimber in 2008. “At that time, we could justify the price because we knew Tigercat’s productivity and reliability,” she explains. Theresa’s boys Callum and Benjamin have a friend in Sweden operating another brand of forwarder. He recently came back to Australia for a visit and tried out the Tigercat 1075C. “Want to have a go?” asked Theresa. “Now he keeps telling us he hates us because he’s had a taste for the best.” Theresa and daughter Zoe love clay target shooting and wont the Junior and Ladies High Gun Championship for the Cooma/Tumut Gun Clubs in 2018.

Both boys have always wanted to work with their parents in the bush. They finished school at sixteen, completed their Certificate III Training in harvesting and hauling and didn’t want to do anything else. P & T Lonergan Pty Ltd currently has a six-year contract with five and a half years left. The end goal is to have the boys take over the business when they are ready to retire. Theresa’s daughter’s role in the family business is just as important as her sons. “She may not come out here but she gets home from school at 3:30 pm. She’ll do a load of laundry for us and she’ll put tea [dinner] on,” Theresa says, “She’s a big help. If I am in the machine all day, we wouldn’t get fed if it wasn’t for her.” Theresa and Peter are happy with the two crews they have now. They have thought about expanding to a third crew but staffing is a problem. There is a shortage of operators in the area.

“For people that love being outdoors, it is a good gig. You make a good living. Women need to be more involved. If their partner is in the business, get out and have a go at it, even if it is just understanding the machinery and trying to be a bit more hands-on. There is no need to hide in the office,ˮ says Theresa. 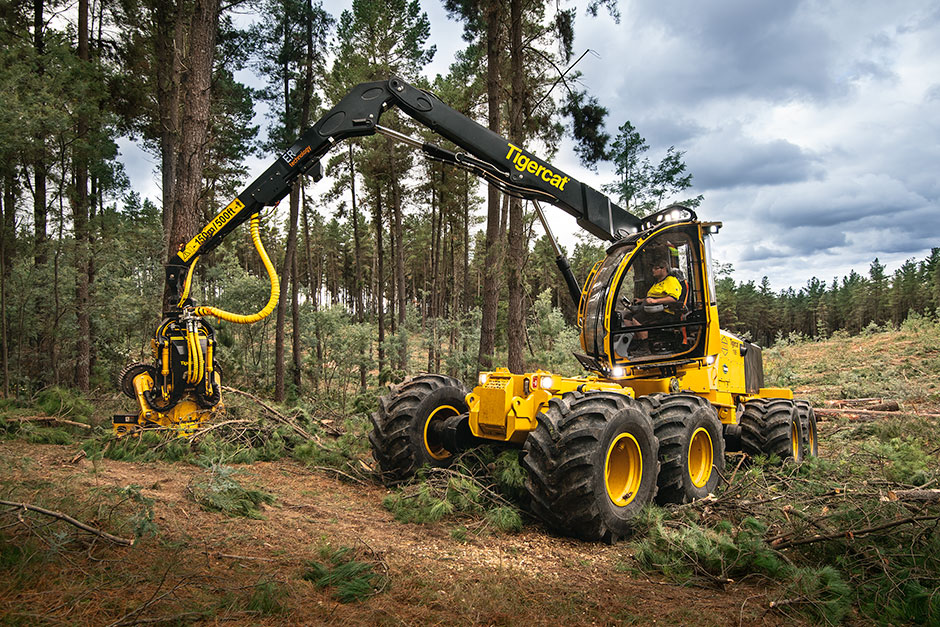 Callum operating the Tigercat 1185 harvester on a machine trial day.

I WOULD ENCOURAGE YOUNGER OR OLDER FEMALES TO GO ON AND HAVE A GO.
Learn about the safety concerns, be aware, and there is nothing to be scared about. Look, the machines are big and heavy, and when you’re doing maintenance on then, it can be challenging.
But look, if you’ve got a good crew you will get the job done together.


Samantha Paul begins a new series on women in logging with hopes to inspire young women to consider logging as a career. First up, an interview with BC based operator, Hannah Dehoog that explores how she got into the logging industry, what life is like for a woman in logging camps and what she loves about being an operator.