BTB catches up with 26-year-old Harry Sanders III to see how things are going with his new Tigercat H250D processor.

Last summer Sanders Logging purchased the first Tigercat H250D processor – 575 harvesting head package to be sold in Georgia. As a third-generation logger, Harry Sanders has been with the family business for a little over three years. He has a forestry degree from the University of Georgia and has been working in the woods since he was just thirteen-years-old. Harry loves what he does and is very passionate about the industry. He is part of the Young Alumni Committee for the Warnell School of Forestry at the University of Georgia, is on the Board of Directors for the Bleckley County Chamber of Commerce and is on the Emerging Leaders Committee for the Georgia Forestry Association. What initiated interest in purchasing a processor for your operation?

We ended up buying the processor because of the mill that we haul to. We haul to Interfor, a Canadian-based company that is expanding in Georgia. They have seven mills in Georgia and they’re integrating their systems from what they have in British Columbia to what we have down here. And to be productive and efficient, the processor was the best way to go. We thought that we could maximize the process, so that’s when we started looking into it. From the get-go I knew I wanted a Tigercat carrier. I just didn’t know what kind of processor head. Did you know of anyone else in the area with a Tigercat processing head?

There’s not many Tigercat processing heads in the southeastern US. I think there are two in Arkansas, and I got those guys’ phone numbers and I started calling them to get feedback on their experience. The Tigercat 630E skidder was purchased at the same time as the H250D processor. The processor has accumulated approximately 1,700 hours and the skidder has 1,800 hours.

So you were set on the Tigercat carrier. How did you decide on the full package with the Tigercat processing head?

At the Tidewater Demo last year, I was hanging around some of the [Tigercat] engineers discussing various processing heads that are used in the southern US. Later during dinner, one of the engineers I was talking with brought over Mr. Ken to discuss the idea of building a Tigercat processing head for the south. The next day, Tidewater and Tigercat had a management meeting where the idea was brought up and discussed in further detail. Tidewater called later that day and said, “We’re going to build one and we’re going to bring it to the south.” I was happy to be given the opportunity to be the first one to demo it. In my head, I knew I was going to buy it. The following Monday, I received a formal package detailing the machine specifications. I just couldn’t wait for it to come.

I’M A COMPETITIVE PERSON SO I TOOK ON THAT CHALLENGE
AND I WAS READY TO DO WHATEVER IT TOOK. So when was the machine delivered?

The machine was delivered in August. After the phone call a couple of months passed and it was the Tigercat 25th anniversary ceremony. Tidewater invited me to attend and I actually got to see the head and the carrier being built. That was the day that I said to myself that I was a Tigercat man. I saw how you guys run your operation and I was really impressed. I really believe in the core Tigercat values. I like what Tigercat stands by. It is similar to what my father laid upon me growing up and it is how we run our business. I can just see the passion and I really felt it when I came and visited. I was blown away by everybody. It seemed like everybody really enjoyed their job, from the guys and girls painting, to the people designing the machines. It was a real homey feeling and I’m a small-town guy so it just felt right. Another 60 days rolled by and the machine was delivered to me in Georgia.

WHAT MADE ME FEEL BETTER WAS THE FACT THAT I HAD SEVERAL TIGERCAT
GUYS STAY WITH ME FOR ABOUT THREE WEEKS TO GET ME STARTED.

Was it a big learning curve for you and your crew?

I was kind of nervous about it. I had never run a processor. And I didn’t really have any time to learn. It made me really nervous. But what made me feel better was the fact that I had several Tigercat guys stay with me for about three weeks to get me started.

I had a lot of support behind it and that was comforting. I was very sure that the product was going to be good. I just had to make it work when it got out here. I’m a competitive person so I took on that challenge and I was ready to do whatever it took.

Around Thanksgiving, Interfor sent me to BC to tour some of their logging operations. They wanted us to collaborate and share ideas as they had been running processors for many years. The objective was to discuss how to effectively integrate the processor into our system. The trip was several weeks after I had already started running the machine, but I still learned a lot and what to look out for. How has your productivity changed since you got this machine?

I am using my processor in 25 to 30-year-old plantation pine with twelve to twenty inch average sized butts. I have put about 1,700 hours on it so far and it has definitely upped my production. It is doing everything that I want it to. Knuckleboom loaders with delimbers are very productive. But when the mill requires you to cut certain lengths and you only have a six-inch window of error, you can’t be efficient and productive doing it the old-school way with a loader and delimber. You can to a certain extent, but I am way more precise and efficient with the processor. I am really surprised with the accuracy of the head. I am shooting out a lot of wood through this thing and I’m truly impressed by how accurate it is.

Have other loggers in the area been curious about the machine?

There has been a lot of interest with it. It seemed like when I first got the machine, I had a fan base out here every day. It was really nerve wracking to me because I was learning to run it and had all these eyes watching me.

What would you like to tell other young people that may be considering logging as a career path?

You can make a good living doing what we do. If you love being outdoors every day, it is a great job. It’s different scenery all the time because we’re constantly moving tracts. You have the opportunity to meet a lot of people over the years and build really good relationships with them. 
Harry Sanders talks about optimizing logs and multiple sorts. Learn how Harry is getting the job done with a Tigercat H250D processor coupled with the Tigercat 575 harvesting head. 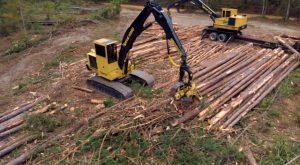